TRiKS has encouraged members to get involved in coaching and we have an ever expanding group of professional and experienced coaches, providing structured training sessions throughout the year. 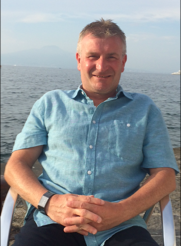 I am married with one daughter and work as a Production Manager in a local brick works.

I am a qualified level two run coach and used to coach the juniors at the local athletics club before moving into coaching triathlon after taking my level one triathlon badge.

The thing I enjoy the most is trying to help people to enjoy the sport and seeing them improve & to reach their potential with a smile on their face.

I am a level 2 coach in both athletics and triathlon and have been a competitive triathlete for about 8 years, representing the GB age group team a number of times. I am experienced in both adult and junior coaching and particularly enjoy helping beginners and children to enjoy having a go, improving and reaching their potential.

I got involved in triathlon in 2009 after having my second child, as A PE teacher I have always played sport but gave up playing netball to focus on triathlon as I could fit in training around my family, and I ran and swim competitively as a teenager. I decided to do a GB age group qualifier in 2009 after a colleague raced in Australia and I thought I may be able to do that too! I have loved every minute of my triathlon career and decided to become a level 2 triathlon coach to hopefully inspire the future generation of 'Brownlees'.

I entered my first triathlon with my eldest son in 2009. I had coached him and his friends at the local swimming club but both of us were looking for a new challenge and decided to take up triathlon. I have level 2 swimming teacher qualification and I run the Wednesday club swimming session. I have represented Great Britain at age group triathlon for the last four years.

I am married with one daughter and first got into triathlon about 6 years ago. I have grown to love the sport over this time and been lucky to have travelled to some amazing places to compete both home and abroad meeting some wonderful people along the way.

I have had some great coaching throughout my time in triathlon and now I would like to give some of my time to help others enjoy the sport, so I have decided to take my level one coaching badge which will give me the opportunity to do this.